The politics of vacuum

The disappearance on February 3, 2008 of the Chadian politician Ibni Oumar Mahamat Saleh is not a minor affair. He was the general secretary of the PLD opposition (Liberty and Development Party) as well as the general secretary and spokesman for the Coordination of Political Parties in Defence of the Constitution, the CPDC, which represents 21 political parties. In his sixties, Ibni Oumar Mahamat Saleh was a prominent figure in Chadian politics. Leader of the FEANF during his student days in France and later active in the Frolinat movement that led the first opposition rebellion in Chad, Oumar Mahamat Saleh held minister positions during the Idriss Déby presidency as well as that of his predecessor Hissène Habré. In 1994 he was dismissed by Idriss Deby and eventually joined the ranks of the opposition. According to the report of the inquiry commission set up after his suspicious disappearance, submitted to Déby on August 5 and published on September 3, the opposition spokesman Ibni Oumar Mahamat Saleh was arrested by members of the Chadian Army and « is now assumed dead ».

Ibni Oumar Saleh was presidential candidate in the national elections of May 2001. He challenged the results and was subsequently imprisoned. His party called for a boycott of the 2002 legislative elections, the 2005 Constitutional referendum, and the 2006 presidential elections ; elections that were considered neither fair nor free. Manifestly he represented a threat to the French backed dictatorship of Idriss Déby. With the disappearance of Ibni Oumar Mahamat Saleh also vanished the hopes of the Chadian people for a more representative political forum.

Then on August 15, 2008 we learned that the dead body of Joachim Atsutsé K Agbobli was found on a Lomé beach in Togo. Aged 67, he was a former Togolese minister and politician ; president of the MODENA party (Movement for national development ) he was also director of the weekly magazine, Afric-Hebdo. M. Agbobli claimed that the published election results in Togo never corresponded to the real ballot verdict. He himself was preparing the coming 2010 elections and no doubt posed a viable alternative to the local potentate, Faure Gnassingbé.

The suicide hypothesis advanced by the attorney general is preposterous given the circumstances of M. Agbobli’s “disappearance”. The suicide claim, manifestly put forward to avoid further inquiry is in fact an acknowledgement of sorts of the criminal character and political dimension of M. Agbobli’s death. Despite strong protests from Togo’s political and civic leaders, M. Joyandet, French Minister for cooperation, on a recent visit to Togo announced September 1 that France would double its aid budget to Togo.

The murders of these two important opposition leaders can be added to a long list of African political assassinations which continue to prevent any popular candidate who manifests the intention to conduct a policy of national interest from acceding to power. Both men, M. Agbobli as well as M. Ibni Oumar Saleh respectively opponents of Faure Gnassingbe and Idriss Deby had publicly deplored rigged presidential elections, and both were viable presidential alternatives.

Confronted with the irrepressible desire of African citizens for a “normal” political life which matches the consensus of international public opinion, the continuing resort to political assassination in order to maintain despotic regimes in place is likely to plunge Africa into further chaos. It is utterly futile for Nicolas Sarkosy to urge the United Nations to step up development aid to eradicate the economic disequilibrium of African societies as long as he remains unwilling to denounce the routine practise of political murder which is an obvious source of civic exasperation ! The policy of indulgence towards the assassination of potentially, independent African leaders followed up with hyping regret for the absence of a serious political alternative seems to be standard, foreign policy procedure in some government circles when dealing with the maintenance of our African allies. So it is indeed not surprising to observe that whenever a political opposition somehow manages to surface and become serious, it has every chance of rapidly disappearing from the political scene.

(Translated from the French by JF) 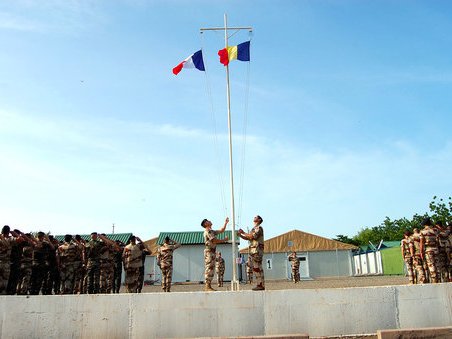