Survie’s position on Immigration and Migration

The freedom to circulate, to move from one place to another is a fundamental right which must not be violated or circumscribed

At some moment in our lives anyone might want to leave their country to travel for example or sometimes to put down roots in another country. So first of all we should reaffirm our fundamental human right to come and go freely from one place to another. Assigning someone to residence is a sanction, a punishment or an abuse of authority. It is shocking to observe that anyone who exercises the fundamental right to travel can nowadays be treated as a criminal or a delinquent! Paradoxically the easier it becomes to travel the more the right to travel is restricted. For centuries Europeans have profited from the technical improvements of locomotion to settle down in North America, in Latin America, in Australia, in northern Africa and many other far away places. Now suddenly European governments are saying it’s against the law for people to circulate freely, especially those people who want to travel or relocate for the very same reasons that pushed Europeans to expatriate themselves in the past. The epitome of hypocrisy! Nevertheless that’s exactly where our government is heading via tailor-made immigration policies that are being negotiated with each of their African satellites. The general deal offered is money, equipment and training for African law enforcement agencies in exchange for their promise to control and impede their fellow nationals from leaving the country in blatant violation of article 13 of the 1948 Universal Declaration of Human Rights to which France still subscribes in principle. What does this article say? It asserts that every citizen of any country has the right to leave the country of his or her residence including the country of birth.

Profitable or Throw Away Immigration?

For decades France has been taking advantage of immigration flows. After World War II reconstruction and industrial development were greatly facilitated by immigration policies, which encouraged people particularly from the Maghreb regions to come and work in France. During the so called Cold War decades Western governments and civic associations adamantly campaigned for the liberty of circulation and stigmatized the Soviet Union and their satellites for prohibiting their citizens to leave the country if they so desired. The thirty years call to bring down the Berlin wall epitomized this campaign for the freedom “to choose” the society in which you wanted to live.

Then in the seventies after many African territories became nominally independent entities France began to restrict immigration from the southern hemisphere. Ever since then immigration regulations have become more and more circumscribed engendering at the same time an ever growing clandestine immigration, that is to say people working in France without adequate immigration documents (the so called “sans-papiers” or undocumented).

Indeed what we are facing today is an immigrant population of our own making, suddenly stigmatized as illegal and undesirable, who far from being treated with any consideration for human rights, are treated like delinquents and exposed to police mishandling and involuntary detention.

The justification for these strong-arm methods is the dominant and supposedly consensual concept that only the “needs”-economic or cultural- of the host country should be taken into consideration to the exclusion of the most elementary of human rights, the right to live as a family. Here again we are faced with ugly, egotistical principles based exclusively on the power-profit leitmotiv.

France is not an overpopulated country; it is a nation with an aging population. The employment issue quickly brandished whenever it comes to immigration is only eyewash. The real working economy comprises vast sectors of activity - construction, industry, tourism, hotel and catering business to name a few - which rely on tourist immigration and immigrant labor. There is no reason to suppose that France has an immigration “problem”, however what France does have is a problem with racism when it comes to Third World countries, particularly with those from its former colonial empire. This is all the more surprising since precisely immigrants from those countries who have shared our history and maintain their Francophone speaking habits would appear to be the community of predilection. Incontestably the outlandish media coverage of isolated news items concerning particular immigrant neighborhoods outside of Paris has served all kinds of propaganda which consistently portray this or that community as unassimilated or incapable of assimilating whereas in reality they have already been “Frenchified” by decades of colonialism or neocolonialism and want nothing else but to integrate and advance within French society. The so called integration gap results primarily from obliging a great number of poor people, particularly recent immigrant workers to live in ghetto situations which leave them little choice but “identity pride” to assert their dignity. To stigmatize this form of consolation as some kind of backlash is as inappropriate as it is indecent and hypocritical. What do all these right-minded cynics and moralizers want in the end? Are they seeking to completely demoralize or provoke a population that for years has been held up to the French public to be pilloried and rejected?

States where livelihoods are untenable within a ferocious world order

Focusing predominantly on immigration as a problem or a menace conveniently begs the question of why immigration has become problematic and even more pointedly to what extent French neocolonial policies have contributed to exacerbating the need for Africans to emigrate towards Europe as a last resort. The ongoing pauperization of African populations is essentially the result of foreign domination, which in the past as still today, has conditioned most of the catastrophic political and economic choices taken by African governments, statewide or regionally. This of course is no earthshaking revelation as we all know, experts and lay observers alike. What nowadays is called co-development and what used to be labeled as cooperation is doomed from the outset if we continue to squander funds on pseudo charity without attacking the fundamental inequities which guide the political- economy of North-South commercial exchange.

To begin with our policy makers should recognize that the most important and efficient transfer of development funds has originated within the African immigration itself whose yearly money transfers are higher than those of our own government’s public aid budgets. Despite this effort from within the Diaspora, the monetary flows leaving African states towards Europe and other non-African continents is still much greater than the incoming flow, thereby ineluctably impoverishing the African continent as a whole. Before we start talking about treating the disorders of commercial exchange between Africa and Europe our government could begin by not aggravating them through its suppression of direct funding from African immigrants who work in France!

Moreover a great deal of African impoverishment is directly related to the pillaging of natural resources by multinationals outside of Africa whose substantial profit margins depend on maintaining venal heads of states in power who readily consent to economic endowments towards foreign investors contrary to any sane national economic policy. Obviously what ordinarily is condemned in the West is manifestly tolerated if not encouraged in Africa-namely corruption- and this supranational disorder is definitely not the making of any African emigration! Another apparently insurmountable set of obstacles to the economic well being for most of the Southern Hemisphere’s peasant population are the lopsided government subventions and commercial treaties which favor western agro-industries but ruin small-scale farming both in the North and the South while at the same time they prevent development of native, food producing industries which could supply markets within the Southern Hemisphere and particularly in famine endemic Africa. If public leaders within the Southern Hemisphere do not manage to inflect the trade agreements of the World Commerce Organization, all the expert speak about development or co-development will amount to no more than talk, while ever growing numbers of people will seek exodus.

The most elementary respect for humanity on the part of the political orders that emerged from World War II and after the end of the cold war in the 1990’s should induce us to cherish diversity and reject degrading treatments for other fellow human beings, regardless of origins. Stigmatizing, blackballing and expelling immigrants is not going to recreate full employment nor will it renew the feeling of financial security that has now been ruined by repeated delocalizations, overproduction and monetary speculation. The harsh and humiliating laws proposed by Sarkozy to shield Europe from a supposedly undesirable immigration will no doubt bring on additional hardships to families already in distress and will most likely succeed in stirring up feelings of xenophobia which in France as elsewhere in Europe have always provided fertile ground for social tempests. Is this what we want? Is this what France needs?

Symptomatic of serious, systemic disorders in today’s global economy, the present day phenomena of forced migrations should at least convince our policy makers of the dire need to reorient their policies in the battle against poverty towards political and economic options which will rid the South as well as the North of the most obvious and perfidious manifestations of injustice.

Note from the translator : Survie is doing all it can to circulate this message horizontally among civic associations, media representatives and the French public at large. We have no idea whether our platform will be taken into account vertically speaking since we do not occupy any position of power. Therefore we are counting on YOU to relay this message to your elected representatives, to your friends and to other civic groups.

Note : for the complete, original, French version of this platform check out the rubric Communiqués et lettres ouvertes at Survie.org in French 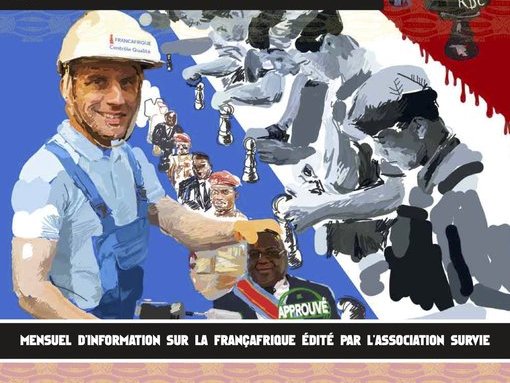 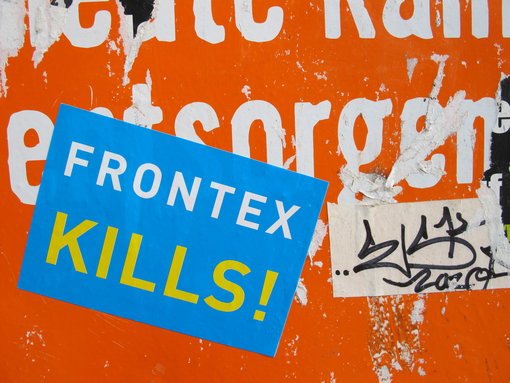 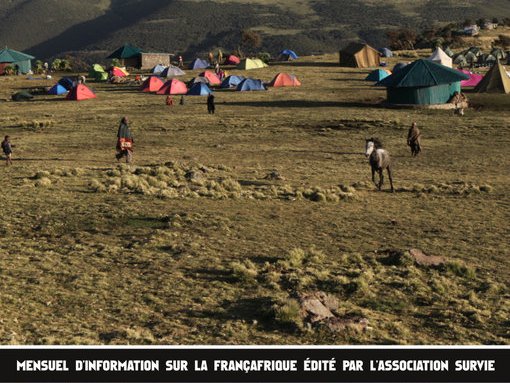 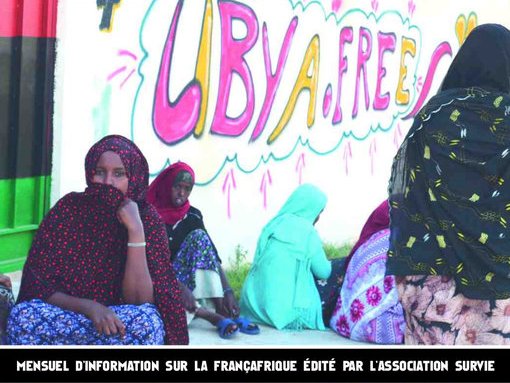